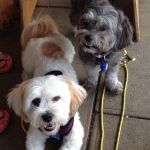 Our Missy Wing (a 3 and a bit year old Maltese-Shitzu) was mauled early December last year, traumatic for her, for Lola (her doggy sister, a 2 1/2  year old Maltese-Lhasa recently rescued – her story here ) and us. The dog involved was a neighbour’s and well cared for, it was just a series of unfortunate incidents. Fortunately Wing did not receive any internal injuries or broken bones and by January was physically fine. Although vibrational essences helped, neither she nor Lola were really getting over it. Her anxiety was heightened around large dogs and unexpected events and she looked worried all the time. Lola stepped up to protection mode but her tail was still in playful love-bug mode giving very confusing signals to everyone. She was also barking all hours (poor neighbours, poor us) and could not stop herself.

I decided to do a surrogate balance for them one Sunday. I did Lola first with the goal of feeling included in our household, part of a team and safe. As a recent rescue that seemed relevant, especially as she had tried to walk home during our Christmas visit to Tenterfield (we think she thought she was going to be re-homed AGAIN).

Surrogate testing is used to muscle check and my partner stepped into that role. On checking, Lola’s focus, centering, communication, rhythms with her body and her sense of being in charge of herself were all switched off. That made sense with the way she was acting and the fact that she had recently had a bad reaction to chicken and her skin was still inflamed. Switching these elements on required working with the kidney meridian (where we store fear) and balancing out her listening skills (which had been super sensitive even for her) plus some emotional stress release.

I then worked with Wing with a similar goal but added in being the team leader for Lola as she does like to be in charge and she had taken that role until being bitten. On muscle checking she was over focused, with her centering, body rhythm, rhythm with herself and being in charge of herself all switched off. Again that made sense. Getting her back in balance required working with her lung meridian (where we store our self worth) and kidney meridian (anxiety), her vision (which had kept her on high alert watching for danger) and resetting her connection with herself. 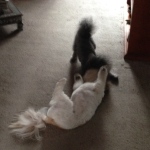 Immediately we finished they started actively playing with each other (which they hadn’t ever really done as Wing had been mauled too early in their relationship and they had not progressed to real play). In addition, that night and subsequently they slept through without barking. Phew. Lola was more able to hear commands and respond and Wing stopped watching and constantly stressing. She even started looking like her little happy self again and wag her tail.

To be honest they have recently become a bit barky – egging each other on now. I think it is the upcoming moon! Last night after writing this I went home and did a follow up. Again, amazing. Lola was experiencing a genetic miasm. As part Lhasa, she was bred to be a noise maker – but was going way overboard and wouldn’t acknowledge us or hear the quiet signal once she got started. Wing needed a re-balance in the systems of relationship area – and, yes, she and Lola have really bonded and play a lot together and she was being caught up in Lola’s barking behaviour instead of quietening when asked.

Afterwards, they both crashed. Wing slept quietly all night. Lola had a short bark at a possum in the proverbial army boots but stopped herself immediately and came up for a ‘good girl’ tail wag.

Many would say they are just dogs and would have been fine, true, but with much less joy for both them and us. I felt very grateful to be able to help put Wing’s smile back on her face and help Lola settle into our home.