A Lesson In Manifesting, How Lola Came To Be

The concept of the possibility that our household could contain an additional pet was raised when Garry, a lost fox terrier, stayed overnight a month or so ago. Surprisingly Wing was totally chilled about it. He had no identification and several friends speculated he was to stay 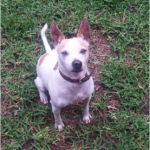 however I knew his family was missing him and would track him down, as they did. We did however start to open to that possibility. It was not yet time to look but it was an interesting idea.

(Being 100% present you become open to inspiration and what the universe could be offering you…..)

The actual opening was a rescue cat looking for a home. She was beautiful and reminded us of the late Albert that ruled the house for years. But on feeling into it a cat was not the best option for us – my partner commented a dog would be better than a cat for Miss Wing and so the energy started to flow.

(Start to dream and feel into the offering, does it feel like the course of action you would like to go….)

We got clear about what we wanted; a younger female, similar size as Wing, healthy, with a good nature and some basic training with the overall intention that she would be a good friend to Wing, helping her bond back into the doggie world rather than just to us.

(By clarifying your vision you put your order in…..)

I looked up Pet Rescue, and found a possibility, Teenie, grounding our intention into reality. It turned out she had just been adopted but synchronistically, Caramel, a little Maltese x Shitzu (like Wing) was to arrive in a few days and we could have her right away, without her being advertised.

(By taking action synchronicity can start to flow….) 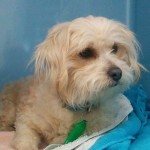 On Monday I got a picture of Caramel, just arrived in Qld and looking a little worried, from Carrie at the rescue organisation, she looked like a negative exposure of Wing, she was a perfect age, had a sweet temperament and seemed ideal. She was being de-sexed on Tuesday, all going well we could meet and greet on Thursday and have her on Saturday. It was my weekend off and we had nothing on all weekend – it seemed perfect timing.

(Do not attach to the outcome at this point! Let go of control and allow the process its own space….)

Tuesday evening I took a call from Carrie, Caramel was carrying puppies and needed to be in foster care for the next 3 or 4 months. We could still be first on the list then, but that was the end of the adoption road for now.

We had been working very much with ‘if it was meant to be it would be’ but, out of character (or perhaps I should say in the shadow of the eclipse!!!) I had fallen in love with the photo of Caramel. By attaching to that picture and putting meaning on random signs, without realising it, I was trying to orchestrate the process.

I was very disappointed even though I knew, without doubt, the right dog would turn up for us at the right time. And I was a bit annoyed, I had the weekend open and space for her to integrate with us. I knew, if we looked for another, how hard that would be to organise that space later in the the year, but waiting till next year for Caramel seemed wrong for Wing. It felt like it was all falling apart, mostly because I created expectations and attached to the outcome.

We re-affirmed we wanted a friend for Wing and that next year was probably too long. If we were still looking when Caramel was available, she was The One, but otherwise waiting till next year was too long. I had another look on Pet Rescue. It was quite painful seeing all those little faces looking for homes and I doubted my ability to find Wing a good friend. 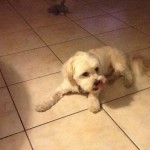 I saw Lola, put in an expression of interest but she had been promised elsewhere. I created a pet alert to stay on track with our intention and re-affirmed my trust that the right dog would come along.

(As things shift and change re-affirm, change or cancel your intention and take action…)

Friday night, as I was finishing work, Lola’s foster mum rang to say the other lady had not turned up and we could pick up Lola, if we still wanted her, in the morning, at the start of our free weekend. 🙂 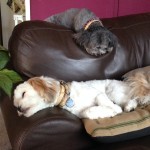 And that is how Lola came to be part of our family. All in the perfect timing I had seen but NOT in the way my ego thought it should happen.

You can initiate change in your life by taking some time to reflect on the way you manifest. Notice what holes you tend to fall into – for example is it about expectations and control like me?  or a lack of patience or jumping to fast? perhaps you listen to others or don’t check into what you really want? or perhaps you are not open to possibilities?

Wherever your particular holes lie, once you identify them you start to change, so that next time, maybe you will not only miss that hole but you can find a whole new way of being.